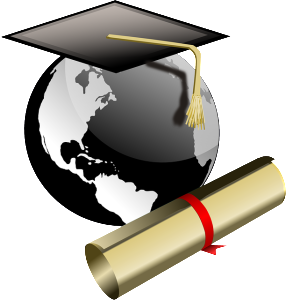 This is the third in a series analyzing the teachings and policies of Jehovah’s Witnesses in regards to advanced education.

Higher Education provides a range of benefits at both a personal level and to society in general.

Personal benefits extend beyond just earnings potential, and include job security and contentment, along with higher quality of life.

“Future benefits include higher lifetime earnings, more fulfilling work environment, better health, longer life, more informed purchases, and lower probability of unemployment…. A gain in lifetime earnings is the most easily observed benefit that accrues to individuals who invest in higher education. Mortenson (2000) reports that, in 1999, lifetime earnings were $1.163 million higher for men who received a bachelor’s degree rather than a high school diploma.” The Private Benefits of higher Education: An Examination of the Earnings Premium (Laura W. Perna, Research in Higher Education, Vol 44, No. 4, August 2003) pp.451-452

It comes as little surprise that the U.S. Religious Landscape Survey 2008 by the Pew Forum identified Jehovah’s Witnesses as having the second lowest level of Post Graduate degree educated members, and lowest level of families earning over $100,000. 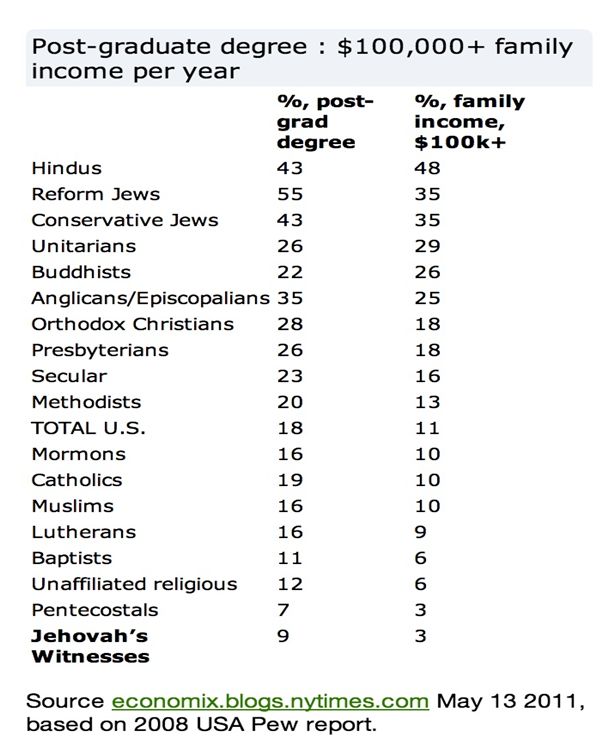 An educated population also provides a range of social benefits. Higher levels of education lead to a more productive and progressive workforce. People that obtain a higher education are also more conscious of looking after their health, other people and the environment, as quantified in the following table by McMahon.

Figure 5. The Private and Social Benefits of Higher Education: The Evidence, Their Value, and Policy Implications Walter W. McMahon – 28th Sep 2013 [Link to report and charts]

Education is vital to improving world conditions. The scientific revolution has led to a dramatic increase in living standards and human rights. Over the last 200 years, life expectancy has doubled in developed countries, from around 40 to 80 years.[foot]“The average length of human life has roughly doubled over the last 200 years. Most of this increase took place over the last 100 years. In Australia, life expectancy at birth was 57 years in 1901-1910 and increased to 80 years in 2000.” Beyond three score years and ten: Prospects for longevity in Australia, Heather Booth & Leonie Tickle [/foot] Philosophical enlightenment is behind the abolishment of slavery and improvements in women’s rights. Progress remains to be made, and education is the driving force behind further improvement. Regardless of a person’s religious outlook, everyone should appreciate the enhanced living standards that education provides.

In a more immediate sense, a higher education provides a better base from which to start a financially rewarding career and live a happy and successful life. Whilst a common cliché is that money does not bring happiness, a search on whether income is the key to happiness reveals that studies consistently show freedom from financial insecurity is critical to happiness, and up to a reasonable level, money is one of the primary keys to happiness. Many Jehovah’s Witnesses that could have excelled at university have not been given the chance, and suffer with limited career options as a result. Whilst it is possible to be successful without a university degree, the odds are stacked against you. Income statistics for the year 2005 from the US Census Bureau, 2006 reveal “roughly half of all those with graduate degrees were among the nation’s top 15% of income earners.”[foot]http://en.wikipedia.org/wiki/Personal_income_in_the_United_States [/foot] The 2009 Canadian Survey of Financial Capability reveals, “men with less than Grade 9 education earned $40,400, about 44% of the $91,800 earned by men with a university degree.”[foot]http://statcan.gc.ca/pub/89-503-x/2010001/article/11388-eng.htm [/foot]

Whilst not directly prohibited, Watchtower’s ongoing negative comments against higher education place psychological pressure upon teenagers when considering their future education and careers. It is hoped that articles such as this alert young Jehovah’s Witnesses that the Watchtower is not a reliable guide regarding the future, and to plan wisely for their careers.

If you are a Jehovah’s Witness student contemplating your career, carefully consider the wisdom in planning for your future. It is highly likely that you will at some point settle with a family, and you do well to take steps now with that in mind.

Teachers, career advisors and others assisting young Jehovah’s Witnesses in deciding the best course after high school can point them to the more balanced information contained in the Watchtower during the 1990’s, particularly the Watchtower 1992 November 1. That way they may feel more at ease with pursuing Advanced Education, if that is going to be an appropriate option.