↓
Home Menu ↓
Skip to primary content
Skip to secondary content
This is part two of a three-part series by Paul Grundy that analyzes the teachings and policies of Jehovah’s Witnesses in regards to advanced education for youthful members.

A Changing Stance on Education

From inception, Watchtower leaders took issue with the education system, bemoaning teachings that contradict a literal interpretation of the Bible. Russell commented: 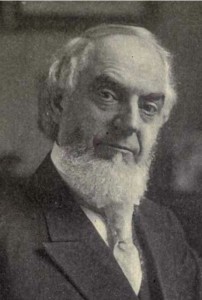 “I advise all Christians not to send their children to colleges or universities; for if they do, they will risk a great deal through infidelity and unbelief, and they will be doing their children a positive injury…My advice is, then, give your children an education up to the public school limit, not even attempting to take them through high school, for they get plenty of Higher Criticism in the high schools, and it will not be long before they have it in the common schools also.” [What Pastor Russell Said (Leslie W. Jones Chicago 1917) pp.Q57-Q58]

This mentality continued through the coming decades, with a range of reasons provided for avoiding a higher education.

Over 40 years ago, young followers were told that a college education was pointless, as the system of things will likely be finished before they graduate.

“If you are a young person, you also need to face the fact that you will never grow old in this present system of things. Why not? Because all the evidence in fulfillment of 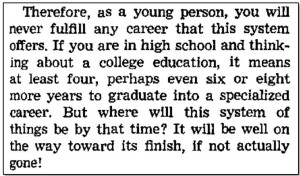 Bible prophecy indicates that this corrupt system is due to end in a few years. Of the generation that observed the beginning of the ‘last days’ in 1914, Jesus foretold: ‘This generation will by no means pass away until all these things occur.’-Matt. 24:34. Therefore, as a young person, you will never fulfill any career that this system offers. If you are in high school and thinking about a college education, it means at least four, perhaps even six or eight more years to graduate into a specialized career. But where will this system of things be by that time? It will be well on the way toward its finish, if not actually gone!” Awake! 1969 May 22 p.15

Jehovah’s Witnesses that followed this advice in the 1960s, and relinquished opportunities to pursue an education and successful careers, are now at retirement age. Comments on Internet forums identify many from that era as financially unprepared for retirement, having worked in low pay jobs, or spending years in voluntary service to grow the Watchtower organization. A short-term view of the future is of no benefit, and has proven to be detrimental to many Witness families over the last century.

Twenty years later the same misguided advice was given.

“A university degree may or may not improve your employment prospects. But one fact is indisputable: “The time left is reduced”! (1 Corinthians 7:29) For all its presumed benefits, would four years or more in a university be the best use of that remaining time?” Awake! 1989 May 8 p.13

I came under criticism for commencing a Bachelor of Commerce in 1987. I was told that accountants were not going to be required after Armageddon, and should learn a trade. This is in line with Watchtower comments, such as the Awake! 1969 May 22 p.15, which had stated, “trades such as carpentry, plumbing, and others, will be useful not only now, but perhaps even more so in the reconstruction work that will take place in God’s new order.” Witnesses in my district complained to local Elders and the Circuit Overseer. Since I was a regular pioneer and assisted with quick-build kingdom halls whilst at university, the elders found it difficult to be overly critical of me, when I was so obviously putting the Organization first, more so than most of those leveling the criticism. The result is that I now have a fulfilling career and comfortably provide for my family.

1992 saw a brief respite to the Watchtower’s criticism of Jehovah’s Witnesses attending university. It was acknowledged that in many countries a higher education was needed for jobs that could support their families. Better-paid jobs meant less overtime, and more available time for meeting attendance and preaching. Watchtower also required educated brothers to fulfill roles at Bethel. Attending university was considered acceptable, provided motives were pure and courses selected with care.

“It has been reported that in some countries many well-intentioned youngsters have left school after completing the minimum required schooling in order to become pioneers. They have had no trade or secular qualifications. If they were not helped by their parents, they had to find part-time work. Some have had to accept jobs that required them to work very long hours to make ends meet. Becoming physically exhausted, they gave up the pioneer ministry. What can such ones do to support themselves and get back into the pioneer service?’ Watchtower 1992 Nov 1 p.18
‘…when parents and young Christians today, after carefully and prayerfully weighing the pros and cons, decide for or against post secondary studies, others in the congregation should not criticize them.’ Ibid pp.19-20
“If Christian parents responsibly decide to provide their children with further education after high school, that is their prerogative. The period of these studies would vary according to the type of trade or occupation selected. For financial reasons and in order to enable their children to get into the full-time service as quickly as possible, many Christian parents have chosen for them short-term study programs in vocational or technical schools. In some cases youths have needed to be apprenticed to some trade but always with a full life of service to Jehovah as the goal. If additional courses are taken, certainly the motive should not be to shine scholastically or to carve out a prestigious worldly career. Courses should be chosen with care. This magazine has placed emphasis on the dangers of higher learning, and justifiably so, for much higher education opposes the “healthful teaching” of the Bible. (Titus 2:1; 1 Timothy 6:20, 21) Further, since the 1960’s, many schools of advanced learning have become hotbeds of lawlessness and immorality. “The faithful and discreet slave” has strongly discouraged entering that kind of environment. (Matthew 24:12, 45) It must be admitted, however, that nowadays youngsters meet up with these same dangers in high schools and technical colleges and even in the workplace.” Ibid pp.20

Barbara Anderson worked in the writing department at the global headquarters, Brooklyn Bethel, during the 1990s. Anderson recalls that Governing Body member Lloyd Barry, who himself had a university degree, was behind this new stance on education.

“Lloyd Barry was empathetic towards the low-paying job plight of Witnesses as expressed in personal letters received at headquarters, and from Jehovah’s Witnesses branch office communiqués from around the world. … Due to difficult economic changes in a world that Witnesses could not escape from, Lloyd Barry, along with the rest of the Governing Body, authorized the November 1, 1992 Watchtower article that changed the view of Witnesses towards higher education.”[foot]http://freeminds.org/doctrine/education_anderson.htm [/foot]

Anderson provides a second reason for the change.

“Interestingly, another Governing Body member, Dan Sydlik, shared with a friend that the Watchtower Society was finding itself in a difficult position because this mammoth publishing company needed skilled technical people but couldn’t find them in the Witness community.”[foot]Ibid [/foot]

During this period, advice was still given about the dangers of university, such as that if “a Christian is considering pursuing additional schooling, he would do well to examine his own motives to make sure that selfish, materialistic interests are not the driving force.” (Awake! 1998 Mar 8 p.21) However, the articles were more balanced, concluding, “such decisions are of a personal nature. Christians ought not to criticize or judge one another on this matter.” (Awake! 1998 Mar 8 p.21)

Likewise, Watchtower 1999 Sep 1 p.17 provided warnings about bad associations on campus and that “the time left is reduced,” but vetoed that:

“…Parents may arrange for their children to receive some supplementary education after high school. Planning ahead in this way so as to care for adult responsibilities and especially so as to be able to share in the pioneer service over the long term is not incompatible with putting God’s Kingdom first.”

It was not until October 2005 that pursing “Higher Education” was again specifically discussed in the Watchtower. Once more, criticism against higher education started to be released regarding the cost, immoral environment, time pressures, and lack of spiritual focus.

“In most places, however, higher education is expensive and is getting more so.” Watchtower 2005 Oct 1 p.28
“In addition to the bad environment, there is the pressure of schoolwork and examinations. Naturally, students need to study and do their homework to pass the exams. Some may also need to hold at least a part-time job while going to school. All of this takes a great deal of their time and energy. What, then, will be left for spiritual activities?” Ibid p.29
“And most important, what are the young ones learning about things that should come first in their life? ” p.30

Anderson provides an explanation for this back flip.

“A decade later, it was observed that “upon graduation, they were not working part-time and pursuing full-time service goals anymore.”[foot]Ibid[/foot]

Another possible explanation are falling growth rates since 1995. (See jwfacts.com/watchtower/statistics.php) The Governing Body possibly attributed this to higher numbers of Witness children graduating university. Whilst university attendance may have affected growth, other factors have also been at play, such as freedom of information available on the Internet, and the growing irrelevance of the generation[foot]http://jwfacts.com/watchtower/generation.php[/foot] and 1914 doctrines.

Since 2005, there have been regular articles against advanced education.

“Do you not agree that to continue enjoying divine blessings, we must resist seeking things for ourselves at the expense of Jehovah’s worship? That is so whether the activity or interest diverting our attention is the pursuit of wealth, get-rich-quick schemes, ambitious plans for advanced education to have a desirable career in this system, or programs of personal fulfilment.” Watchtower 2006 Apr 15 p.27
“If you have a means of supporting yourself, do you really need to spend time, money, and effort on further education just to realize personal aspirations or those of your parents or other relatives?” Watchtower 2011 Jun 15 p.30

A Watchtower outline for Meetings of Circuit Overseers with Congregational Elders and Ministerial Servants for the period March through August 2008 explained that promoting higher education could result in demotion.

“When an appointed servant promotes higher education for the purpose of economic gain or prestige, this places in doubt his qualifications to serve in the congregation, and may affect his freeness of expression and that of his fellow elders.” p.2