For 25 years I’ve been the director of SNAP, the Survivors Network of those Abused by Priests, the world’s oldest and largest support group for clergy abuse victims. We have more than 15,000 members across the globe in all denominations, including nuns, rabbis, bishops, and Protestant ministers. And we’ve helped victims, witnesses and whistleblowers in other institutional contexts too, like athletic programs and Scouting and summer camps.

I can’t recall ever seeing a policy anywhere that is more predator-friendly and self-serving than the Watchtower’s “two witnesses” rule. On its face, it is dangerous and callous. If any crime is likely to have no witnesses, it is child sexual abuse. If the law enforcement community adopted this rule only a handful of child predators would be charged, convicted and imprisoned every year.

One wonders if this rule means that Jehovah’s Witness officials do nothing even when they hear about another JW official admitting to molesting kids.

This policy endangers kids and invites predators. It protects only one small group – the Jehovah’s Witness hierarchy. Even then, it protects them only in the short-term. Thankfully, more victims are finding the strength to report child sex crimes, more police are investigating them, more prosecutors are prosecuting them, and more lawyers are suing them.

As Martin Luther King said “No lie lives forever” and “The moral arc of the universe is long, but it bends towards justice.”

This rule will be revoked someday. The only question is how much moral authority and members will the Jehovah’s Witnesses have squandered and alienated – and how many kids and families will be devastated in the meantime.

Outside of the Jehovah’s Witness hierarchy, virtually every other adult believes that we should all call police if we see or suspect child sex crimes. (Not everyone does this, of course. But nearly everyone believes this is the right course of action.) But the JW hierarchy is wrong on both fronts – policy and performance, belief and behavior.

The “two witnesses” rule is a stunningly heartless and reckless policy that is guaranteed to cause more heinous crimes against children. 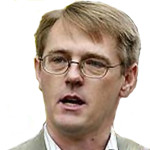 Since 1991, David Clohessy has served as SNAP’s national director, setting up local support groups and doing thousands of interviews (including Oprah, Sixty Minutes, the Phil Donahue Show, Good Morning America). He’s been a community organizer in poor neighborhoods and provided political and public relations consulting. David is married and has two sons.

SAVE THE DATE:SNAP annual conference – August 1, 2014 in Chicago