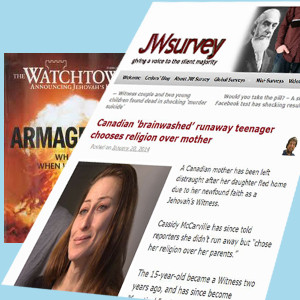 JWSurvey.org recently published a news story titled “Canadian ‘Brainwashed’ Runaway Teenager Chooses Religion Over Mother.” (Read it here.) While that recent news report upset me, it is an unfortunate story that has been repeated many times before. In fact, it is also my story – although mine has a happy ending.

I first came in contact with Jehovah’s Witnesses was when I was ten years old. They offered to start a Bible study with me, but I was too young and my Italian Catholic parents were dead set against the idea.

The Jehovah’s Witnesses were back at my door – but this time I was no longer a child but a young adult. The conversation seemed to pick up from where it had left off all those years before and once again they offered me a free Bible study. This time I accepted, along with my younger sister. Little did we know (or even suspect) where it would lead us.

In hindsight, I can now see how they misled us right from the start. The indoctrination was so subtle that we were not even aware of it. They told us during our very first “Bible study” that we would encounter strong opposition and much of that opposition would come from our own family. They used the scripture at Matthew 10:34 to reinforce this message on us. It reads:

And so, just as the Jehovah’s Witnesses warned us, the opposition and persecution began. And indeed, it did come in the form of our parents.

The arguments were relentless–the screaming and shouting became a constant part of our family life. The more they forbade my sister and me to study with the Witnesses, the more we dug our heels in and believed that we had found “The Truth.”

Things came to a head one day after a particularly bad argument. Our mum delivered an ultimatum: Stop studying or leave the house. Because we were living under our parent’s roof we were subject to their rules and regulations. They delivered their ultimatum, without doubt, trying to scare us into stopping our weekly Bible studies. Instead, what it did was drive us straight into the arms of the Jehovah’s Witnesses.

We seized our chance to escape whilst our mum went about her daily chores. We snuck upstairs, grabbed some clothes and toiletries, and made a run for it.

We contacted a local Jehovah’s Witness family. They took us to the home of another family who took us in for the night. While fired with righteous indignation, we were still scared, excited and nervous all at the same time. They told us that we had “done the right thing” and had “chosen Jehovah” – and we believed what the Witnesses had told us.

I don’t know for sure what my mum’s reaction was when she realised we had left home. I think we may have scribbled a quick note and left it for her to read. I can well imagine the heartbreak that we must have caused her as she read that note and the full realisation of what we’d done finally sank in.

To this very day I bitterly regret having caused that untold hurt and grief to my parents. But I realize that we were “puppets on a string.” Our puppeteers were Jehovah’s Witnesses.

As the weeks passed by, we heard about our mother’s heartbreak, her failing health, and of the shame we had brought, not only upon our own family, but also for the wider Italian community. We heard that our dad had come looking for us, rifle in hand, the day after we left. He was furious and reacted in a hot-headed way. Luckily for everyone, he didn’t find us or any of the local Italian Witnesses. Eventually, his temper cooled down and he finally returned home – although desperate, angry and with his pride wounded in ways he could not hide.

The Witnesses, far from being concerned about breaking up a family and bringing such pain in its wake, were joyous. They commended my sister and me for our bravery and held us up as outstanding examples for all to see. They told us that this is what it meant for us “to fight for The Truth.”

Weeks turned into months and the Witnesses helped us find a bedsit to stay in. I found a part-time job as a waitress. My sister and I lived as well as we could in accommodations that were less than desirable.  By that time we’d heard through the grapevine that our parents considered us as “dead” to them. We soon found out exactly what that meant.

One day my sister and I were walking in town and came face to face with my mum – who completely blanked us. This came as a complete shock to both of us. Nonetheless, this event convinced us that we were being persecuted for the sake of “The Truth.”

Somewhere along the line our mum had a change of heart. Unbeknown to our dad, she sought us out and started coming round to visit us. She would bring us bags of groceries – and on occasion even give us some money. While we could see the toll our leaving had taken on her, we still refused to give in and return home despite our mum’s pleading and tears.

A Father Buries His Pride to Save His Family

After we had been away from home for nine months, our dad turned up at our door. He was beside himself with worry for my mum as she had taken to her bed, ill with the stress and months of tears and sleepless nights. He begged us to come home – something that must have been very hard for him to do. There he was – a proud Italian, a big strapping man – reduced to coming to his daughters, cap in hand, pleading with them to “please come home for your mother’s sake.”

That very night we took a few of our belongings and returned home. Our dad hadn’t told mum that he’d gone to ask us to come back. When we got home, mum was overjoyed and in tears with the relief of having us back home. But we made it clear to our parents that if we were to stay we would need our freedom – and that “freedom” meant our being able to carry on studying with the Witnesses. They reluctantly agreed because they really had no other choice. That was the price they had to pay to keep us at home.

We were able to re-establish relationships with both my parents, my sister more so than I. Eventually I was baptised, but my sister was not. I became a full-fledged Jehovah’s Witness and remained one for fifteen years.

My life was strained. I couldn’t share in family celebrations like birthdays, Christmas, or Easter. That caused a rift between us, even to the point that when I got married none of my family attended the wedding.

When I look back at that time in my life, all I see is hurt, pain and a wasted life. I realize that I dedicated the best years of my youth to a lie – and in the process broke my parents’ hearts. Had I known then what I know now, I would never have taken the path I did.

A somewhat longer version of her video…