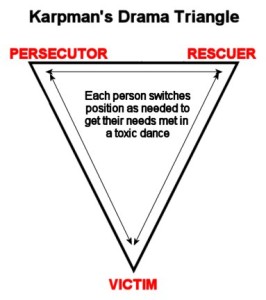 One of the tools I have found very helpful for people exiting a cult who want peace of mind and to find their authentic identity is Karpman’s Drama Triangle.

The Triangle can help people understand their relationship with a spouse, an ex-spouse, a boss, employees, friends, parents, children, neighbors and their church leaders.

In fact, I just shared the Drama Triangle with my local, Ottawa, Canada, ex-JW Meet-Up group to see if they could find uses for it in their lives, and it turned into a lively positive conversation.

The Triangle was first used to help people understand the manipulations of family members in dysfunctional families.  But over time, the Triangle has been used to identify unethical persuasion techniques in many other types of relationships.

The Drama Triangle is easy to understand and use when one learns the basic principles. While there are assigned positions on each point of the Triangle, people do not always react to those positions.

People who psychologically manipulate and unduly influence other people to get what they want will take a certain position on the Triangle. If that position doesn’t work for them, they will often move to another position or keep circling to find a position that gets the other person to give in to their demands.

To maintain some degree of stability and peace, the other person may shift to another point on the triangle to allow the manipulator to win that round.

One of the applications for the Drama Triangle is with Jehovah’s Witness parents and their ex-JW adult children. The parents may see themselves as the Rescuer and constantly “nag” their children to go back to the Kingdom Hall and the meetings. To the adult child, this may feel to them like they are the Victim, being persecuted for the choice they made.

The shunning policy of the Watchtower will also result in many ex-JWs feeling like they are the Victim.

The adult child can move to the Rescuer role by placating the parents and go to a meeting or not talking about religion with them. This dance will repeat itself many times. However, there will be no resolution as long as religion divides them.

Watchtower, a rule-oriented tyrant, becomes the Enforcer to Witnesses who don’t follow the rules. Watchtower also becomes the Rescuer telling members there is a reward if they are obedient children. If someone says something negative about Watchtower, it and all JWs become the Victims whose rights have been trampled.

This is the dance that Watchtower forces on all Witnesses. As it indoctrinates new members into its religion, members are slowly introduced to the toxic dance of the Drama Triangle.

The only way to stop the dance is to get off the dance floor and out of the Triangle. Stop playing the game. Some people refer to this as reverse shunning.

One of the problems about having spent time in Watchtower’s toxic environment of unethical persuasion is that even though one may leave, they can take this form of relationship management with them. They thus act out the Triangle in personal relationships with their spouse, children, friends and people at work.

The Victim part of us needs to accept responsibility for our self and make good decisions, which is not so easy, because as JWs most decisions were made for us.

While we no longer have to feel guilty about taking care of our own needs, we must stop feeling like everyone is attacking us. This is JW thinking. Not everyone is out to persecute the JWs. The vast majority of people don’t care about JWs.

We also do not need to be everyone’s Rescuer or Care Taker. If someone wants us to take care of their needs, it’s okay to say “no”. If they don’t like it and decide to un-friend us, we haven’t lost much if all they want is what we can do for them.

For some, anger can take over. They can’t deal with their feelings or decisions.  So they become the Persecutor or Bully blaming everyone else when things don’t work the way they want or people don’t do what they want them to do. And the less people comply, the angrier they often get. They insist that their feelings and right s are above everyone else’s.

I remember this triangle from years ago and the JW experience fits the triangle perfectly. It takes a lot of courage and honesty to look internally and see the hidden paradoxical advantages of all three roles. I noticed in the past myself becoming a persecutor because others would not help me to stay a victim.One thing all three positions seem to have in common is the idea of people not assuming proper responsibility for their own lives.

A victim lives in constant fear. They want others to solve their problems for them so that they don’t have to face up to the hardship and fear that solving the problems for themselves brings. A victim quickly turns into a persecutor to temporarily bolster their low self esteem by blaming others for their problems and feeling a sense of moral superiority. A rescuer usually has a mountain of their own problems that seem to be overwhelming so they distract themselves from solving them by attempting to help solve the problems of people playing the victim role to get an emotional high.

When I was a JW I found it exhilarating and addictive to play the rescuer and help people solve their problems with the “truth”. When the message was rejected it was easy to play the role of persecuted victim and feel righteous. As a persecutor what an emotional high it was to denounce the wickedness of this world and feel special, holy, clean, and elite. Who could be more special and worthy than one whom God chose to receive life-saving secret knowledge while the rest of the world would perish?

After leaving my JW experience, the triangle continued. Now I could persecute this evil cult by exposing it. I could rescue victims from it. I could tell my harrowing tale and get sympathy as a victim and put my life on hold by continuing to blame them for where I am now.

David brings out some great examples of how the drama works with other people. But he very honestly takes a look at how he was part of the drama and how important it is for each of us to take a close look at how we continue to stay in someone else’s or even our own drama. It is so easy to point the finger at what my mother, the elders or a sister did. It is much harder to look at what we contribute to the problem.

The members of my ex-JW Meet-Up group were able to see very quickly how they personally took different positions depending on the situation. For some, they realized the dance only stopped when they decided to exit the triangle. Others could see the dynamics at play with co-workers, bosses, ex-spouses and JW family members. And some could see how they needed to stop dancing to the tunes other people were playing.