When I was a Jehovah’s Witness, I thought evangelism or preaching was bad if it was not Watchtower-based. For many years as an ex-JW, I was convinced that any kind of religious proselytizing was nothing more than unethical persuasion.

So I was intrigued, while at a 2012 ICSA (International Cultic Studies Association) conference, in Montreal, Canada, by a session addressing the pros and cons of evangelism. I attended the one-hour meeting facilitated by a retired college professor, Elmer Thiessen, and his insights proved to be a real eye-opener for me.

What was particularly impressive was Thiessen’s list of Fifteen Criteria that one could use to determine the ethics of a church group’s proselytizing methods.

Now, with no editorializing on my part, I am going to post those fifteen criteria to help you decide if Watchtower or a religious group that you might be associated with engages in ethical or unethical evangelism as follows:

The attitude towards all people must be to treat everyone with dignity. Each person must be valued as a person in their own right whether they want to learn more or not. It is unethical as soon as the potential recruit becomes an object to gain status or becomes nothing more than another drone whose sole purpose is to recruit more members to the group.

Ethical care for a person means caring not only for some future life but caring for the whole person NOW, in this present life. It needs to include their physical well-being, their emotional, psychological, financial, and social well-being, not just their spiritual welfare.

The use of physical coercion or threats should never be a part of ethical evangelism. “Obey us or die” does not honor the dignity of the person. True freedom means that at any time they have the freedom to walk away with dignity.

We live in a world filled with psychological persuasion. We see it in commercials and advertisements. So at what point does it cross the line to unethical persuasion? Thiessen points out three things to watch out for. Ethical persuasion means:

In all relationships there are degrees of power and control. Hopefully they balance out, so that one individual is not always in a position of power. Exploiting power or using that power to manipulate people is not ethical.

Evangelists often offer physical, medical and/or psychological aid to those who need help. They must be very careful so the aid they offer is in no way connected to whether a person accepts the belief system the care-givers offer. People need to believe there are no strings attached to accepting whatever assistance is provided.

There is no way to get around this. The purpose for evangelism is to convert people to a new belief. Ethical evangelism provides sound reasoning without attempting to side-step certain questions or to avoid answering those questions.

Ethical evangelism must be truthful. Not just what it teaches, but what it reports about other religions. There should never be hidden agendas, lying, deception or misrepresenting the group’s intentions. One must never lie.

Arrogance, dogmatism and condescension are not the marks of humility. Saying you are humble is not being humble.

Ethical evangelism treats all people with respect, especially when people hold differing beliefs. We all have the right to disagree without it affecting our right to respect and dignity.

A person needs to be sure of their motive for evangelism. Is it because one truly cares for the other person? Or is there some ego-centric motivation behind the preaching? Preaching for the welfare of the church, to increase ones status in the church or in front of others, because it gives them power or status over the convert are unethical reasons for evangelism.

It is unethical to try to separate a person from their social and cultural identity. People are people first and that needs to be respected before individual beliefs.

People need to be comfortable about accepting new ideas that feel right for them, and to ignore ideas that do not. There is no one body of religious, social or cultural beliefs that are better than others. People should free to accept what works for them without the fear of rejection based on beliefs.

The numbers of converts should never be proof of a religion’s correctness. Church growth is a by-product, not an end product. Conversion should never be the sole reason for friendship with an individual, dropping them or labeling them as unworthy if they fail to convert.

Evangelism needs to adhere to the Golden Rule, which is to treat others as one would want to be treated. If one is going to preach to someone else, they need to be open to hear what the other person believes. To ignore or refuse to listen to another person’s perspective is disrespectful and unethical evangelism.

Elmer Thiessen moved to Waterloo, Ontario in 2007, after having retired from teaching philosophy and religious studies at Medicine Hat College, in Alberta, for more than 35 years. His official position now is that of a “roving philosopher”, open to short-term teaching and research positions anywhere in the world. His most recent teaching assignments include a philosophy or religion course for seniors at Wilfrid Laurier University, and an introductory philosophy course at Meserete Kristos College in Ethiopia.

He has published numerous articles and book reviews, both in professional journals and religious magazines. His research specialty has been the philosophy of education; here he has published two books, Teaching for Commitment, and In Defence of Religious Schools and Colleges (McGill-Queen’s University Press, 1993; 2001). His most recent work is entitled The Ethics of Evangelism; A Philosophical Defence of Ethical Proselytizing and Persuasion published in 20122 by Paternoster Press and IVP Academic. 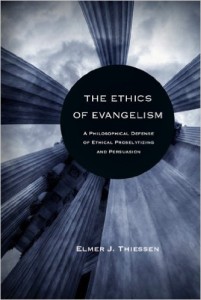