Like something out of the classic movie,“2001, A Space Odyssey,” a “monolith” like image has suddenly appeared in an apparent attempt to rebrand and create a new marketing image for the Watchtower Bible and Tract Society. This particular monolith used as part of a logo (clearly a marketing ploy) can be found floating around the Internet and on Facebook in various incarnations (all rip-offs of a evangelical songwriter’s album cover – Link). It is often presented displaying these words:

They rarely hint at exactly what we all should expect to have “known” on that date. Our guess is this online phenomena may have been part of a concerted effort to advertise the beginning of a new door-to-door witnessing effort by local congregations to promote their corporate website and to change their public face.

This new campaign began on August 1, 2014 in the United States and continued at least through the first weekend of that month. Jehovah’s Witness publishers showed up en masse in neighborhoods and on street corners distributing a tiny 4-page flyer, “Where Can We Find Answers to Life’s Big Questions.” Their current answer seems to be the new version of their website, JW.org.

The Governing Body of Jehovah’s Witnesses, or whoever runs the marketing company trying to rebrand Jehovah’s Witnesses and the Watchtower Society, apparently underestimates the intelligence of those who make up “the world.” Their attempt to rebrand the Watchtower organization may fool some unsuspecting and unaware people. However, the track record of Watchtower abuses is long and their accountability will not be dismissed by simply implementing a new marketing approach. 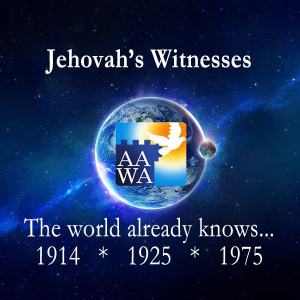 The Watchtower’s policies and practices have not changed.

The only thing we can see is that they have changed their presentation and that their use of a slick  new marketing campaign is now underway. As Jehovah’s Witnesses move into the next stage of their “International Conventions” outside of the USA, the Watchtower’s founding country, the secular press and local politicians should note that the UK’s Charity Commission is currently undertaking a statutory inquiry into The Watchtower Bible and Tract Society. There are just too many issues being raised about the growing number of child molestation within the organization for them to ignore the problems any longer.

In Finland, Watchtower representatives have been publicly embarrassed recently. The Minister of Justice made it clear to them that they “must comply with the law.” The national law he is referring to specifically applies to the activities connected with their use of private “Judicial Committees.” Those “Committees” may be in violation of the law by handing down punishments to individuals outside of the mainstream court system.

“The world will not be fooled by this devious marketing exercise. The ‘world’ still needs to know even more about Jehovah’s Witnesses and their beliefs and hurtful practices.

“Abuse survivors are still waiting for a public apology and a change in the policies that protect pedophiles, allow coverups and put at risk women and children.

“A rebrand is to be expected from a publishing corporation. A rebrand does not wipeout accountability for the countless lives damaged by Jehovah’s Witnesses practices.

“Honesty, openness, communication and respect is what is expected from an organisation that has ‘non-profit’ and/or ‘charitable status.’ Governments and other social and financial supporters need to look deeper than the new marketing spin that is being given to Jehovah’s Witnesses in the formulation of their ‘new’ brand.”

AAWA will continue to highlight the abuses that are the responsibility of the Governing Body of Jehovah’s Witnesses. That won’t change as the Watchtower tries to hide their dangerous and abusive policies behind whatever “new public image” or fancy logo they create to promote their organization. The Governing Body will be judged by their deeds, not by their marketing.