People are far more influenced by situations and social pressure than they realize. In fact, the power of our free will can evaporate when someone is being unduly influenced by a cult-like group, or, in my case, the Jehovah’s Witnesses (JWs). To help you understand why I believe this, I want to share my story about Watchtower’s blood transfusion policy.

My daughter was nine years old when she showed me what looked like a rash on her legs. I decided this needed immediate attention, and drove her to the Children’s Hospital in San Diego, CA, where a nurse took a blood sample. When the admitting doctor told me Tracy’s blood platelet count was 3000 – the normal count is somewhere from 150,000 to 450,000 – I checked her in as a patient.

At first, they thought the rash was caused by something quite simple, although it did not take long before they realized it was very serious. It was likely that she would need a blood transfusion, but it could wait for a week or two.

During that first week, I prayed to Watchtower’s God – Jehovah – convinced He would help Tracy get better before a transfusion was needed. The Watchtower’s local Hospital Liaison Committee (HLC) (1) also offered support during that time, by visiting with Tracy and me, reading scriptures related to Watchtower’s beliefs about blood transfusions, offering prayers and unduly influencing me, although I did not know that at the time.

I also started to study for the first time the Watchtower’s publications about the prohibition on blood. While most JWs are taught to believe that bloodless surgery is a cure-all, I soon realized this was not the case with anemia. Anemia is a disease that stops the bone marrow from producing blood components. In fact, Watchtower has little in the way of effective alternative strategies for anyone sick with severe anemia. Without a blood transfusion, a person with severe anemia will almost certainly die. Bloodless surgery is not an option.

For all those years that I had filled out and signed the medical directive (2) on blood for JWs, I did it without anyone telling me about anemia or other conditions that require blood. I just assumed Watchtower had all the answers, and doctors used blood transfusions because they were not aware of the benefits of not using blood. Or they were careless surgeons who could not perform a surgery without blood. But still, I figured Jehovah God would find a way to restore Tracy’s good health.

At the end of two weeks, Tracy had not been given any blood. But the doctors now told me that unless she was given a blood transfusion, she would certainly die.

Tracy’s mom, Mandy, was not a JW and we were recently divorced. So Mandy signed the consent form. But because I had full legal custody of Tracy, the doctors proceeded with a court order. I was shocked yet relieved at the same time.

I called a Watchtower attorney, Brother McCabe, in San Diego, and told him about Tracy. He said I had done all that I could do and not to worry: just let it happen.

At the time, I also could not get it out of my mind about Watchtower articles comparing a forced blood transfusion to rape. Then there were other articles about children who became Christian martyrs when they refused a transfusion and died. But I also knew that I didn’t want Tracy to die, and that was inevitable if she refused a life-saving transfusion of red blood cells and platelets within the week.

I felt both anger and relief. But as I observed how obviously aware the elders were of the situation, nonchalantly accepting the reality of a court order, I was enraged. Why? The elders could have forewarned me, telling me that if push came to shove, Tracy would get the needed transfusion. But, no, they let it play out like it was theatre.

The turning point for Tracy was getting the transfusion. After that, she was given EPO shots, a Watchtower-approved blood product that acts as a catalyst to stimulate red cell production. Watchtower reports on this procedure in its blood brochure, but not how long it takes to work. The EPO treatment takes over a week to start working, sometimes longer. However, unless Tracy accepted a transfusion, the EPO shot was practically worthless, and it is not without its own risks.

My best guess in that 99% of all JWs believe there is some special alternative that the HLC can tell the doctors about to save the patient’s life in the event of blood loss or anemia. In reality, with the exception of preplanned surgery, there are few viable options to prevent loss of life in the event of blood loss caused by serious anemia or the sudden loss of massive amounts of blood, as can happen in a car accident or during childbirth.

Watchtower’s literature and videos inform JWs about the positives of bloodless surgery, but little to nothing is said about its limitations or risks. In fact, the blood brochure has not been updated since the 1980’s, and it was useless for me during Tracy’s crisis.

There is the option of taking blood fractions, which is up to the conscience of each JW. But the fact is that fractions are worthless in many cases. Oddly enough, Watchtower permits very large fractions of blood like albumin and hemoglobin, but forbid the extremely tiny platelet that Tracy needed. Why? Does the Bible make this distinction about which parts of blood are acceptable for a Christian, and which parts are not? The answer, of course, is that it does not. It is an organizational policy that is enforced with a clear threat of severe sanction by the Watchtower and local congregation, and undue influence at its worst.

What infuriates me today is that a JW can be ostracized, yes, even shunned, if they take blood and don’t express sincere regret to the elders in their congregation. But what is worse is that the Watchtower has brainwashed its followers to not take a life-saving blood transfusion because they claim that it is the will of God. In reality, when one knows all the facts, Watchtower’s policy is bad science and cult-like theology.

One informed observer estimated that at least 50,000 JWs and children of JWs have lost their lives because of not taking a needed blood transfusion. Other estimates and extrapolations vary from 120 to 900 lives per year.  Regardless of where the actual number might be, it’s clear that more people have sacrificed their lives due to this poorly thought-out blood policy than the deaths caused by any single cult leader over the past seventy years.

I still cannot believe that I didn’t sign the consent form for Tracy. But I know now that this is the power of psychological manipulation and social coercion, showing just how powerful cult-like groups can be.

Tracy made a full recovery. It turns out she had the Epstein virus, which can shut down a young person’s blood production. In older adults, it shows up as mono.

While Tracy understands today how group mind control works and is grateful to be alive, for several months after her transfusion, she was upset with me for not signing the consent form. I had taught her to believe that if she had died faithful to Jehovah, He would have resurrected her. How stupid does that sound now?

I have found peace this last year with the discovery of so much well-researched information on the Internet about the Watchtower’s flawed policies and their culture of undue influence. I have also woken up, and understand how groups like the Watchtower psychologically manipulate their members, coercing them to act against their own best interests. 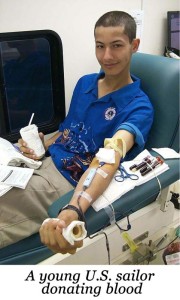 Author’s Note: Several months ago, I shared a first draft of this story with a non-JW associate of mine, who lives in Houston.  His reaction was to go out and donate his blood. A few weeks later, he received a phone call from the father of the girl who was the benefactor of his donation, thanking him. He apparently has a rare blood type.

(1) Watchtower HLC elders receive special training on how to manage Jehovah’s Witness patients, within the confines of the Watchtower’s complex policy on blood, which permits all blood products that have been fractionated, but forbids whole blood, red cells, white cells, and platelets. They are rarely trained medical professionals, and are required to report any deviation from Watchtower policy by a Jehovah’s Witness member. For more information, go here.

(2) Watchtower’s Medical Directive, or what Jehovah’s Witnesses commonly refer to as the “No Blood Card”, is a signed legal document, directing medical personnel to only provide lifesaving treatment that complies with the Watchtower’s complex policies on the use of blood.