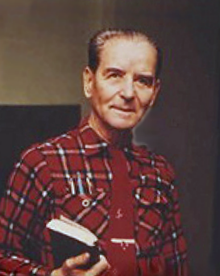 On May 10, 1962, my first day at Bethel, I was told that I would need to attend the Monday night study of the Watchtower, if I wanted to have a successful career at Bethel. My first Monday-night meeting occurred four days later, with Fred Franz conducting.

I was 18 at the time and flabbergasted listening to Franz conduct the Watchtower Study. I had never seen anyone convene a meeting like this. He was extremely self-absorbed and acted as if he might be going crazy. He talked in a deranged-like high-pitch and drifted into tangents unrelated to the study article. One inane comment was a premonition he shared with 600-plus Bethelites, in the Bethel Kingdom Hall, saying, “I don’t know when, but I will die on a Friday the 13th.”

It was a harmless prophecy from Watchtower’s spiritual leader. But the reality is that many of his other predictions were disastrous and totally disconnected from reality. His insistence that Armageddon was imminent in 1975 turned out to be Freddie’s most egregious prognostication. No one tells the story about Freddie’s 1975 fiasco better than Barbara Anderson at: http://watchtowerdocuments.org/fred-franz-rewarded-for-ineptness/. It’s an absolute must-read!

One of the highlights of her post, for me, was about a reporter who worked for Time magazine and interviewed Franz when he became president of the Watchtower Society in 1977 (he had been vice-president). That interview actually resulted in a story appearing in the July 11, 1977 issue of Time.

After the interview, the reporter told a colleague privately that in all his years of interviewing “important” people, after spending an hour with Fred Franz, he was pretty sure that Franz was “certifiably insane.”

Lectures by Franz about 1975 can be found at:  http://watchtowerdocuments.org/audio-archives/