Practicing what they preach has never been a virtue of the Watch Tower Society! That fact was reaffirmed in capital letters in the November 2012 issue of the The Watchtower magazine in an article titled, “Is Religious Faith an Emotional Crutch?” The reasonable (but damning) piece of evidence reads:

“Really, how foolish it would be to accept an idea as true without checking the facts! That would be like covering our eyes and trying to cross a busy street just because someone tells us to do it.”

Yet, the Watch Tower Society turns a blind eye to facts every day in the name of faith. In so doing, they harm its followers who are Jehovah’s Witnesses, their non-believing family members, and the community at large.

Fact 1: Children exposed to violent images – whether on television, in cartoons, or in real life – can be emotionally damaged. Research documentation from studies at Bowling Green State University states, “Three major effects have been proven by psychological research caused by children seeing violence on television are that the child may become less sensitive to the pain and suffering of others; children who watch violence do not fear violence nor are they bothered by violence in general and the children are more likely to become aggressive or use harmful actions towards others.” (http://bit.ly/14DzobC)

Although evidence is clear that violent images are potentially harmful to children, Jehovah’s Witnesses are required to expose their young children to images of Biblical violence on a regular basis. This is done at weekly congregational meetings where Watchtower publications are studied and at in-home Bible studies where other Watchtower-published materials are used. These images include graphic depictions of Armageddon’s destruction of mankind, murders, etc. Even cartoon-style sheets designed to teach young children, and available for download from the Watchtower’s website, contain violent graphic images.

The Watchtower’s actions fly in the face of its condemnation of violence, as published in its Keep Yourselves in God’s Love, which states, “Those who value life as Jehovah does and who want to keep themselves in his love also avoid violence in all its forms.”

Fact 2: Higher education, where critical thinking skills are fostered, benefits individuals and society as a whole. Here’s a short list of benefits, as noted by the College Board (http://bit.ly/17hgcmm):

However, in the face of these facts, the Watch Tower Society tells its members, “Now is the time for any who may be putting their trust in secular education, material things, or human institutions to adjust their thinking.” (Study edition of The Watchtower, November 2013, pp. 20, ¶17) Watchtower leaders promote fear of college culture, parties, too much time spent studying, and the finances required to pursue an education, saying, “How sad that some have fallen away from the faith as a result of succumbing to the demands on their time and energy or of getting entangled in unscriptural conduct at college!” (The Watchtower, 10/05, “Parents—What Future Do You Want for Your Children,” pp. 26-31)

Fact 3: Pedophiles harm children, and frequently a perpetrator is someone the child knows. Often this person is in a position of authority to the child. Parents Against Peadophiles (Resources for Informed Parents) states, “You need to be strong, act quickly and work with your local authorities to investigate and stop a suspected pedophile.” Some of the steps required are to:

Instead of taking the bold action necessary to report an accused offender within the congregation, the Watch Tower Society only reports accusations of molestation to the authorities if required by law. They require two witnesses to an offense before they will take any action against the alleged perpetrator. (Shepherd the Flock of God, published by the Watch Tower Bible and Tract Society of Pennsylvania, 2010, pp. 71-72) It is commonly known that child molesters do not like an audience, so it is usually a child’s word against the pedophile’s. Therefore, perpetrators are free to continue enjoying fellowship within the congregation and show up at the public’s doors while engaging in their ministry work. Children are further traumatized by being subjected to seeing their molester on a regular basis.

Despite the scientific research on the damaging effects of ostracism, Jehovah’s Witnesses continue to shun former members of the congregation, whether or not they are family. Recently, the Watch Tower Society reaffirmed their stance on shunning saying, “Really, what your beloved family member needs to see is your resolute stance to put Jehovah above everything else – including the family bond. … Do not look for excuses to associate with a disfellowshipped family member, for example, through e-mail.” (The Watchtower, 2013 Jan 15 p.16) 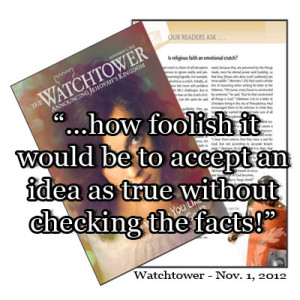 Extreme shunning tears families apart on a daily basis, and has resulted in tragic consequences, including suicides. Many former Witnesses are unable to participate in normal activities such as weddings, births, and sometimes, even funerals of loved ones who are active in the faith.

Conclusion: While the Watch Tower Society tells its members that they should “follow reason” and to “reason on evidence and reach sound conclusions that are based on facts,” their actions belie those words. Current and potential members need to take a close look at the facts (all the facts, not just what the Watch Tower Society prints), identify the gaps, and reason based on the evidence. As The Watchtower says, do not “accept an idea as true without checking the facts!”