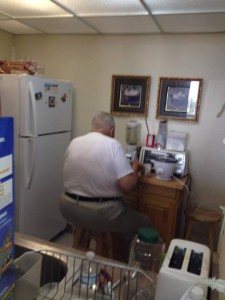 Eating with the family…

This is a picture of my dad eating a meal. He had just made lunch for me, but couldn’t eat it with me. I had to eat it at another table with my then four-year-old son while he sat there looking away from me.

Why? Because that’s what the Watch Tower Society tells him to do.

The first response was, “Don’t know what to say. This boggles the mind; mind-control

religion at its very worst!”

Minutes later a flood of comments and “Likes” followed, reminding me that a good picture can easily replace a thousand words.

For those of you who are curious, I must explain that my extended family began shunning me in 2012, after I questioned the authority of Watchtower’s Governing Body. My family’s unanimous well-meaning response to my doubts was by telling me “I must be an apostate and shunning would surely bring me to my senses.”

After my mother died, my dad, being all alone, went to the elders in his congregation to see if he would be allowed to visit with me. They said that since I was his son, he could visit with me at his house. But, he could not discuss religion – nor could he share a meal with me at the same table.

Two weeks later, I called my dad and asked if his grandson and I could visit him. He said “yes” and even offered to make lunch. But shortly before serving the meal, he said that he wasn’t going to sit at the same table with us. When I asked why, he replied, “The organization says so.”

That confession allowed me to vent my feelings for maybe thirty minutes, describing to him about the harm caused by shunning and other Watchtower policies. He listened politely. But I could see that he was in cognitive dissonance mode – so nothing I said registered with him. In fact, my comments in that environment probably made him even more resolute in his beliefs. But I did not know that at the time

After I spoke my piece, my dad served a nice meal for me and my son. Then he chose to sit alone in a small area of the kitchen with his back turned to us while eating his lunch. I sat there speechless, trying to figure out what was going on in his mind. That’s when it occurred to me that I had to capture this moment on my camera phone.

While eating my lunch, a feeling of pure sadness engulfed me. But as bad as I felt, I had this gut-wrenching feeling for Dad. This had to be much harder for him. Here’s an 80-year-old man thinking that he is doing this for God. He feels he has to suffer through this intuitively wrong act to be loyal to what he thinks is “God’s organization.”

However, the story does not end here. My son is growing up watching this silliness. Can Watchtower be blind to the damage caused by this harmful shunning policy, not just for us adults but for innocent kids who have “no dog in the fight”?

Tears were running down my face as I drove away from my father’s home. But not just for me. I am not alone in this situation. (Other Shunning Experiences) Today, there are hundreds of thousands of us who no longer believe Watchtower’s lies we used to feed on. We now know the truth about harmful Watchtower policies that violate the basic human rights of current and former members.

We can no longer turn a blind eye to the suffering and cries of others due to the Watchtower’s policy of shunning. I know that I can’t!

Extreme shunning is inhumane! It is a cruel and unjust punishment – a despicable act of a coercive high-control pseudo-religious group that is afraid of losing its members and financial contributors.

My goal today is to shine a bright on Watchtower’s policy of extreme shunning; a policy that Watchtower publicly denies to the media and public officials.

My story was first shared in 2013. If you would like to access the original post and see comments and my bio, visit:  Shunning in a Thousand Words The original post was translated into Spanish, French and Dutch, with links to them on this post.

If you are interested in how “cognitive dissonance” works with Jehovah’s Witnesses, read the post at: Cognitive Dissonance. Yes, the facts I shared with my dad about shunning before the lunch meal amounted to nothing more than an ineffective antibiotic and probably made the infection stronger, although I was unaware of that phenomena at the time. That’s why when talking to misinformed JWs, one needs to understand the dynamics of cognitive dissonance.

Thanks to AAWA volunteer Patrick Haeck, a dual language version of this article in English and Dutch is available.

Share with your friends. Here is a short link that you can use on social networks: